Pioneering the Next Generation

Why HMOs are amazing?

Human milk oligosaccharides (HMOs) are amazing things!  It is often said that they constitute the 3rd largest component of human breast milk after the milk sugar lactose and fats or lipids1.  HMOs are complex carbohydrates and the amount found in breast milk varies depending on many factors such as the stage of lactation and the genetic profile of individual women 2.  Research into HMOs is a fast moving field and some studies suggest that there are more than 100 different HMOs found in breast milk while others report that the figure is closer to 200 2,3.  Whatever the final number turns out to be, there are certainly a lot of different HMOs found in large quantities relative to other components of human breast milk.  But here is the thing – they provide very little, if any, direct nutritional value to the infant being breast fed!  It has been reported that only 1% of HMOs consumed by breast fed infants enter the circulation, with the remaining 99% reaching the large intestine, undigested, where they play a number of very important roles in the health of young infants4.

The human gut is home to many millions of bacteria.  Whilst it is often thought that bacteria are things to be avoided, there are in fact many “good” bacteria that inhabit the gut which are important to health in a number of ways.  The HMOs that reach the large intestine intact can be used as a food source by many of these good bacteria, allowing them to play a part in the health of the infant.  In breast fed infants, one particular group of bacterium, Bifidobacteria, predominate4.  The HMOs are fermented by Bifidobacteria and a number of key by-products result.  A number of these by-products are acids which create an acidic environment in the gut and can prevent the growth of “bad” or pathogenic bacteria that can cause diseases and problems like diarrhoea.  The good bacteria using the HMOs as a food also create a number of other by-products that have been shown to be used by other cells in the intestine to maintain good intestinal health4. 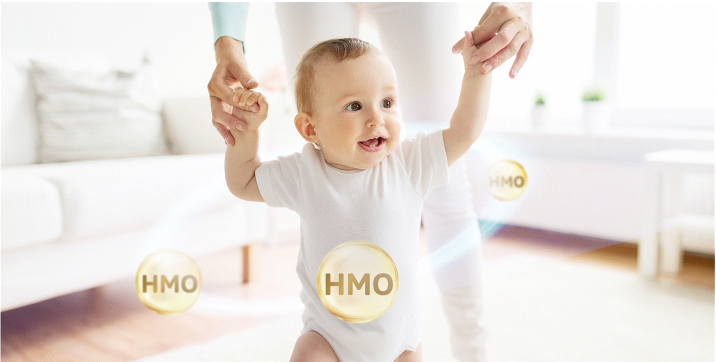 HMOs can also protect infants and young children from viruses in the same way by preventing them attaching to the intestine wall.  Some specific HMOs have been proven to be very effective against specific viruses.  For example, an HMO called 2’-Fucosyllactose (2’-FL) seems very good at preventing a group of viruses called noroviruses, which are contagious viruses that cause vomiting and diarrhoea, attaching to the intestinal wall5.  Another group of viruses of concern to child health are rotaviruses.  Rotavirus infection is the main cause of gastroenteritis and diarrhoea in infants and young children and accounts for about 5% of deaths of children less than 5 years of age across the world4.  Studies in animals have shown that HMOs protect against these viruses6.  Further, laboratory studies have shown that some specific HMOs, including 2’-FL, Lacto-N-neotetraose (LNnT) and 6-Sialyllactose (6’-SL), can reduce the number of viruses that can cause respiratory diseases including influenza7,8.

Clearly, HMOs are important to breast fed infants.  However, infant formula made primarily from a cow’s milk base will not naturally contain such complex carbohydrates and thus formula fed infants may not be receiving the health benefits of HMOs.

Recently in 2021, after quite a long and rigorous review process, Food Standards Australia and New Zealand have given approval for two specific HMOs, 2’-FL and LNnT, to be added to infant formula*, which may be given from birth to children under 1 year of age. Additionally, the Therapeutic Goods Administration have listed 2’-FL as an ingredient for listed medicine for children older than 1 year of age. Please note that *2′-FL and LNnt found in infant formula and dietary supplements are not derived from breastmilk but produced by microbial fermentation, although they are structurally identical to that found in breastmilk.

Infant formulas containing one or both HMOs (2’-FL & LNnT) are now available in Australia. Also, an HMO supplement for older children is also available.  Thus, with these products being available, more infants and young children can potentially benefit from the important properties of HMOs mentioned previously.